Under the new Strata Schemes Management Act 2015 which commences today, 30 November 2016 (“New Act”), the process of strata adjudication has been done away with. Instead, all strata applications will be determined in hearing by the NSW Civil & Administrative Tribunal (“Tribunal”).

Under the Strata Schemes Management Act 1996 (“Old Act”), applications for adjudicator’s orders were dealt with ‘on the papers’. Once an application was lodged, the parties received a notice indicating the time period within which written submissions were to be lodged with the Tribunal registry. Such time period was typically 4 weeks from the date the application was lodged. The parties were granted an additional week to lodge any submissions in reply. Once the submission period closed, the matter was referred to an adjudicator for determination on the papers. The adjudicator’s decision was then forwarded by post to the parties. Under the Old Act, a party could appeal an adjudicator’s decision to the Tribunal within 21 days.

Under the New Act, all strata applications will be dealt with via the Tribunal hearing process. Once an application is lodged, the parties will receive a notice of directions hearing. At this first Tribunal appearance, it is likely the Tribunal member will set a timetable for the provision of evidence and deal with any preliminary or procedural matters. A date will then be set for the final hearing. The effect of the change in legislation means that all parties will be required to appear in person at the Tribunal.

The detriment of the changes is that the strata dispute resolution process will likely cost more. Litigants will need to attend at least one procedural hearing and a final hearing if the matter is not resolved between the parties. Further, litigants will likely be required to prepare evidence, call witnesses, and arrange for cross-examination. Given that in-person appearances are required, it may be necessary to obtain legal representation at an earlier stage of a dispute compared to the adjudication process under the Old Act.

The benefit of the changes is that strata stakeholders are going to benefit from the Tribunal’s broader powers. This includes, under section 248 of the New Act, the ability to impose a financial penalty of up to $11,000 for an individual and $22,000 for a corporation for a breach of an order of the Tribunal. Further, civil penalties are now paid directly to owners corporations, in contrast to the Old Act under which civil penalties were paid to the Office of Fair Trading.

The below table is a useful summary of the differences between the Old Act and the New Act: 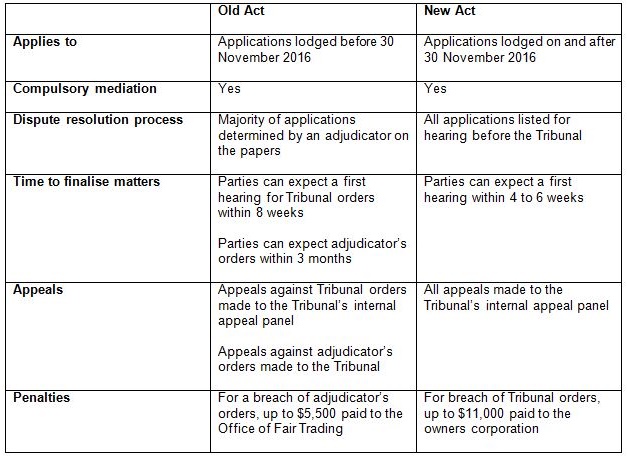